Join us to take action and put an end to Jew hatred! 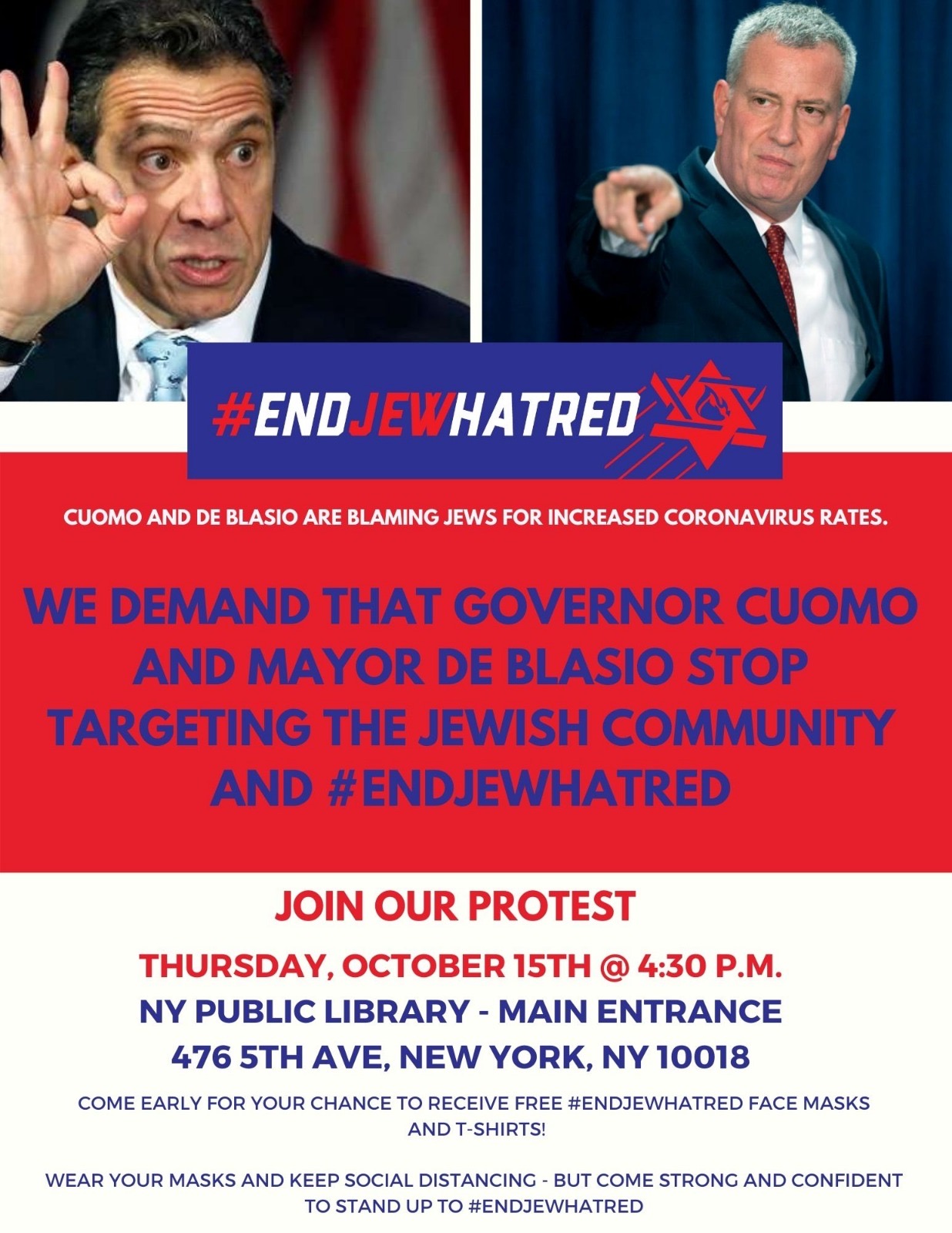 Stand up against Jew Hatred and join us:

Come early for your chance to receive free #EndJewHatred face masks and T-shirts!
Wear your masks and keep social distancing - but come strong and confident to stand up to #EndJewHatred

“My message to the Jewish community, and all communities, is this simple: the time for warnings has passed. I have instructed the NYPD to proceed immediately to summons or even arrest those who gather in large groups.”

“...the issue is with that ultra-orthodox community.”

DeBlasio and Cuomo are blaming Jews for increased coronavirus rates. COVID has disproportionately affected minority communities, including the Jewish community.
Infection rates are:  2.6x Higher for African-Americans.   2.8x Higher for Hispancs.
Jews have been hit just as hard.
‍
Every community fights this plague. Every community has rule breakers.‍

But who do Cuomo and DeBlasio want to shut down? The Jews. It is the only community that has been consistently called out by politicians, even though it has suffered just as badly as other minority communities. That is not right.  That is fanning the flames of racism.

QAnon and the far right blame the Jews for coronavirus and shut downs. Accusing Jews of spreading plague was common in medieval times. But now mainstream politicians are using it to join in and spread Jew hatred.

While Governor Cuomo and NYC Mayor de Blasio are shutting down synagogues and religious celebrations, they are publishing handbooks on “How to Protest.” Shutting down synagogues to prevent spreading Covid while allowing mass gatherings in the form of protests isn’t just ridiculously stupid. It’s also an illegal double standard.

We need to send a strong message to New York that singling out Jews is unacceptable. We need to send the message that Jews are united, and that when one part of our community is targeted we all stand together. There is NO excuse for the government to single out ONE minority community.

Stand up. Fight Back.
Be Heard. 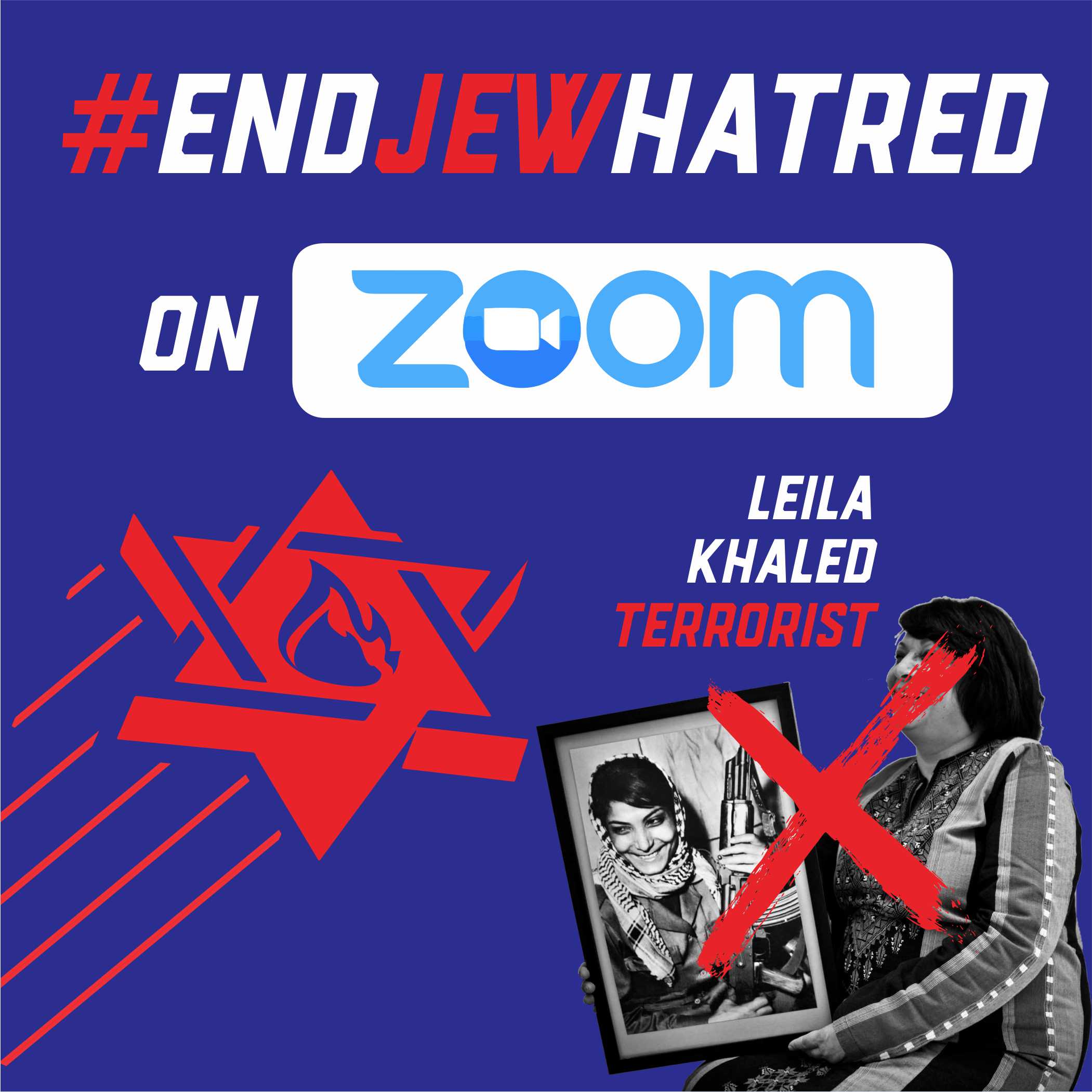 Zoom is promoting Jew hatred at San Francisco State University (SFSU). Leila Khaled is a racist Jew hater, extremist and terrorist. She is a leader of the PFLP, a designated terrorist organization. Khaled is banned from entering the USA because of her murderous extremism and promotion of ideals that lead to mass extermination. Yet she is being invited to teach students at SFSU on Zoom, and is targeting Jewish students on campus. SFSU is using Zoom to illegally spread Jew hatred in the form of Leila Khaled. This must stop.

Zoom must show that it is against Jew hatred, and must stop promoting racism and ethnic cleansing, by banning Leila Khaled and deplatforming SFSU.

What can you do?

Take action to promote the fight for freedom, justice and liberation from persecution by extremists being aided by big tech companies. Prevent Khaled and SFSU from targeting Jewish and Zionist students on campus with their vicious and violent Jew hatred. Demand Justice!

Jews can mobilize to #EndJewHatred!

We are counting on you to show up as a proud minority community and not let big tech give a  platform to a vile racist and terrorist who targets the Jewish people.

Be a part of shutting down Jew hatred on Zoom. CANCEL ZOOM ON SEPT 23RD!

#EndJewHatred on ZOOM by committing to the above three actions today! 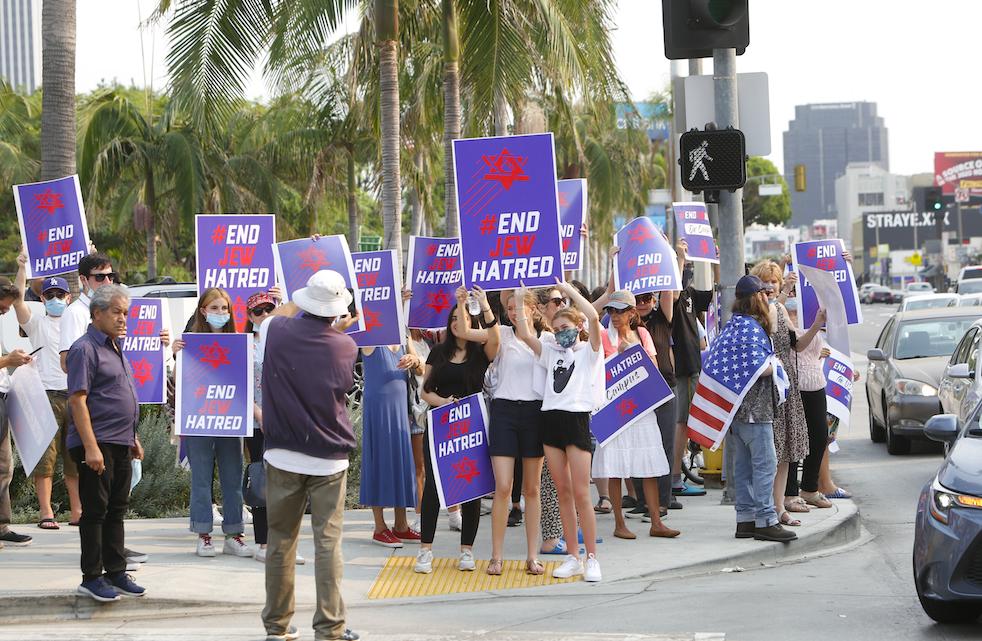 The End Jew Hatred protest at The Grove on Labor Day was an enormous success. We had a huge turnout to show USC and its Chair of the Board of Trustees, Rick Caruso, that targeting Jews on campus will not be tolerated. In spite of the heat wave, the last minute notice and the Labor Day holiday, on September 7 over one hundred people showed up to stand up against Jew hatred on campus.

Thank you to everyone who came and expressed their support, especially to End Jew Hatred’s official partners:

And the many other grassroots activists and organizations that helped spread the word.

We want to especially thank all the people who mobilized and showed up yesterday, held signs, handed out flyers, listened to speakers, chanted and marched to show the world how passionate we are about our movement.

We sent a strong message today, and put Jew haters on notice that there will be consequences.

In fact, we have started a dialogue with Rick Caruso...but we are not done.

Words and protests alone are not enough. Without action, Jew hatred will not be eliminated. That’s why we are working to ensure that systemic Jew hatred is acknowledged and tackled. We are encouraged by the openness to engage and expect to make progress towards our goals.

We demand that Rick Caruso and the administration at USC:

- Recognize there is a problem of Jew hatred on campus;

- Adopt the IHRA definition of anti-Semitism at USC;

- Launch a disciplinary inquiry into the students who harassed Jewish students; and

- Bring in appropriate outside experts to train students and faculty in anti-discrimination legislation.

We ask Rick Caruso, as Chairman of USC’s Board, to ensure that these measures are implemented.

This is just the beginning. We are already planning our next protest. If you care about ending Jew hatred, here are four ways to join the movement.

Use the hashtag #EndJewHatred in your social media.

Start a chapter of #EndJewHatred in your community, send us an email at action@endjewhatred.com

Yesterday proved that the Jewish community is capable of grassroots organizing and mobilization. Keep the momentum going and help us #EndJewHatred on college campuses and beyond!

With deepest appreciation for your support, 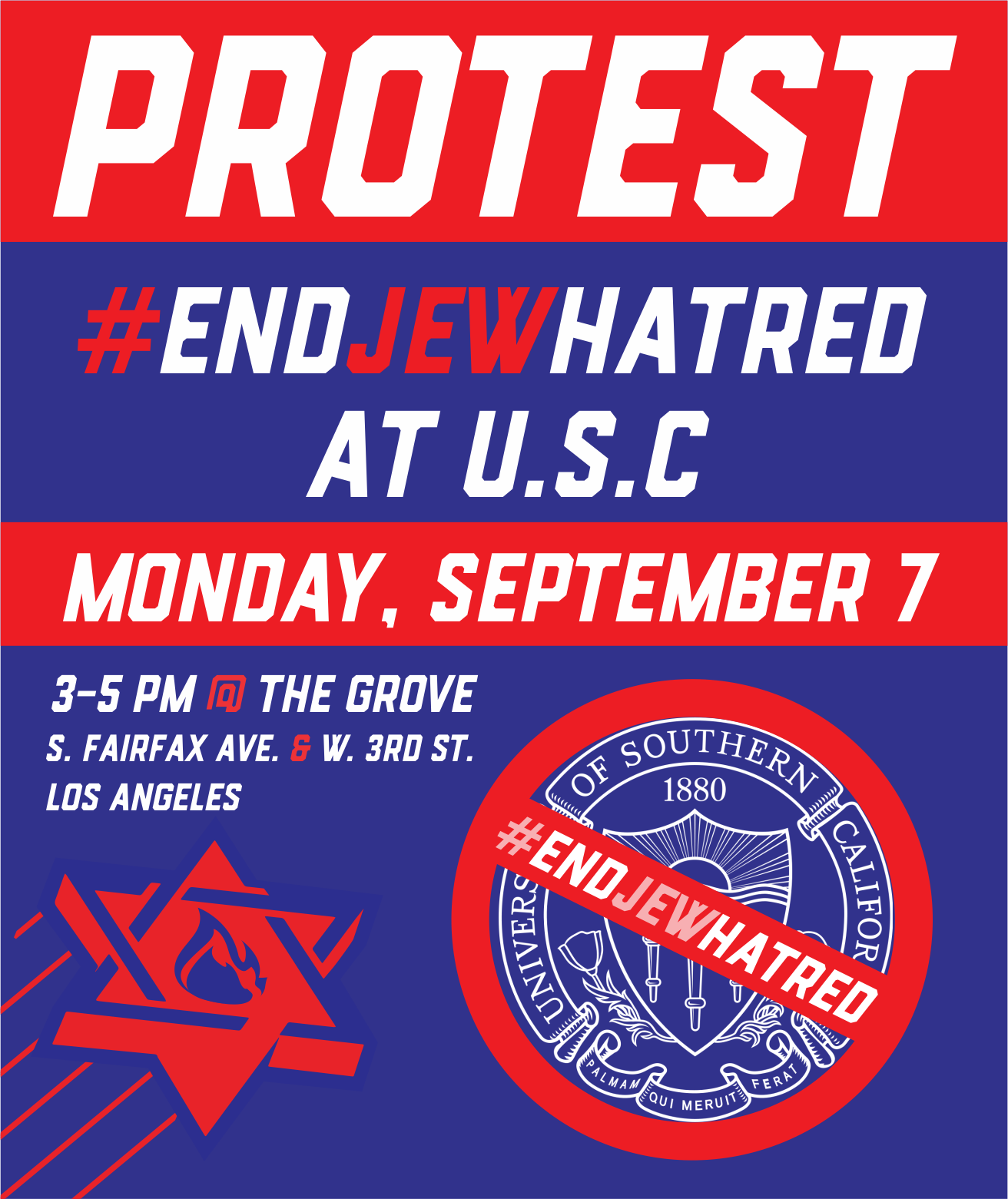 We demand an end to Jew hatred in this generation.

Jew hatred has plagued society for hundreds of years. Jews are no longer willing to tolerate it.

A young Jewish student at the University of Southern California was driven from her position in student government because of her Jewish identity. She was targeted and harassed by bigots on the basis of who she is.

The university was unable to protect her from hatred, even while claiming to stand against it.

The Grove’s owner, Rick Caruso, is the Chair of USC’s Board of Trustees. He has not taken action, or even spoken out about this injustice. Silence is complicity. He supported other ethnic groups, so why can’t he support the Jewish community?

This tragic Jew hatred is all too common in America today, and especially on college campuses, where professors teach ethnic studies courses (now mandated by law in the Cal State system) that erase Jewish history as an American minority community.

We will not allow it to continue unchallenged.

●  RECOGNITION of the historic oppression and discrimination against Jewish people, and the unique way in which that hatred manifests - as a conspiracy theory which paints Jews as powerful manipulators.

●  ACTION from academic institutions to prevent Jew hatred from students and faculty, and the application of Title VI of the Civil Rights Act on college campuses to protect Jewish students.

●  CONSEQUENCES for Jew haters, such as firing professors who discriminate against and pose litmus tests for Jewish students.

●  LIBERATION from Jew hatred now, in this generation.

A historic moment is taking place in the United States challenging all forms of bigotry, racism and misogyny. Inspired by watching successful struggles for justice, we are Jews working to decolonize Jewishness and secure our own equality and freedom.

Stand up to challenge bigotry and oppression. We ask Rick Caruso to stand with the Jewish community and do what is right andfight for justice.

Join the fight for Jewish liberation from discrimination!

We Ask Participants To:

●  PRINT posters and signs from our Resources page and hold them during the protest. Or make your own poster – just add #EndJewHatred to your sign!

●  STAND on the sidewalk,holding your poster to be visible to people driving or walking by. Do not block access to buildings for people or for cars. Do not stand in the street. If people engage with you, do not engage in response. Our rights are not subject to discussion.

●  WE are protesting peacefully. Absolutely no violence, and do not harass others. Follow any lawful instructions given by police officers.

This is NOT a political rally. Please NO POLITICAL OR PARTISAN messages. The message is simple, and let's keep it that way: #EndJewHatred now.