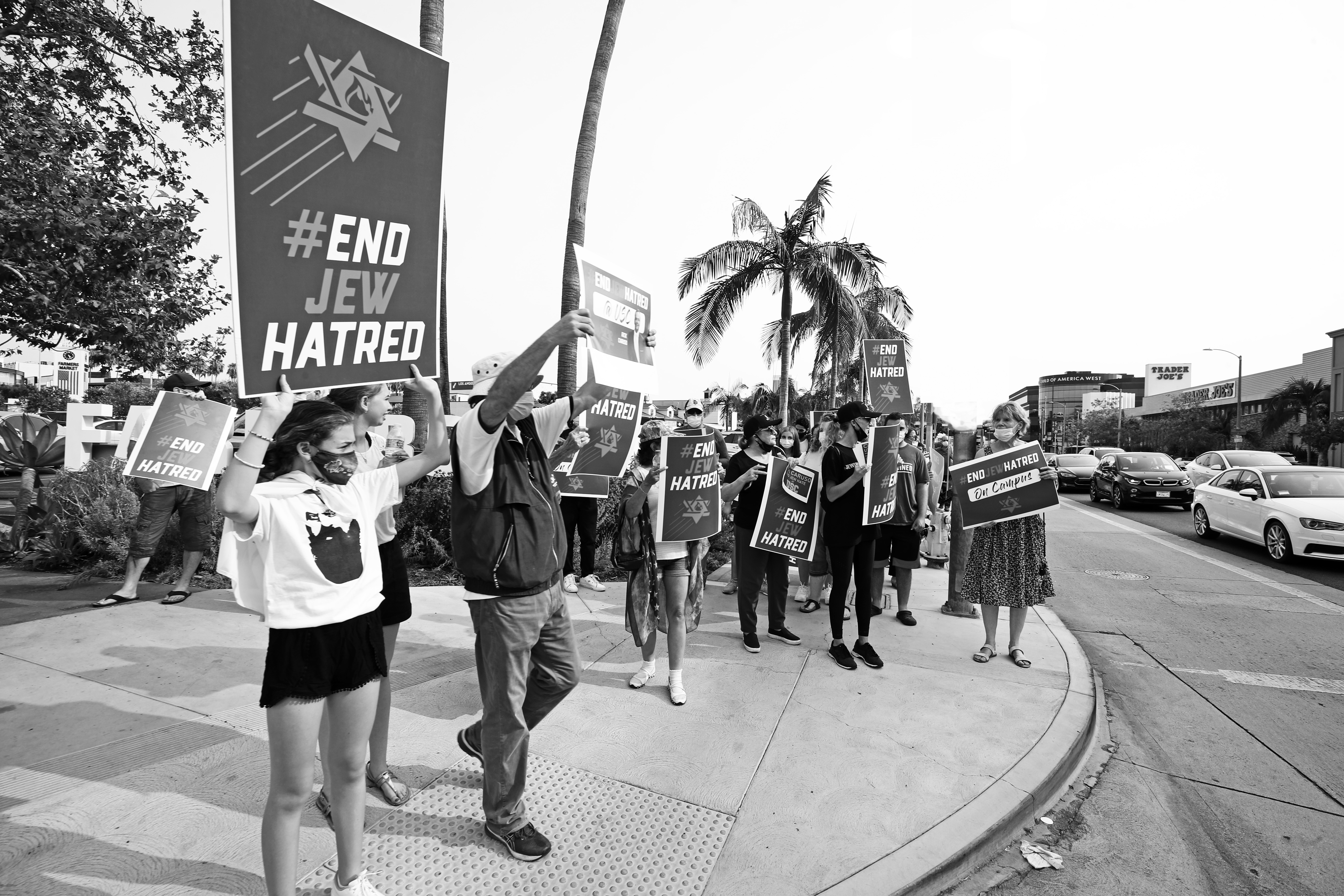 End Jew Hatred seeks to empower and liberate Jews from centuries of persecution and discrimination. We demand a world in which Jew hatred is acknowledged to be detestable and unacceptable, just as hatred or violence against any other group: blacks, LGBTQ+ or women. We are a non-partisan civil rights movement  focused solely on justice for the Jewish people.

For centuries, discrimination and oppression against women and minority groups was tolerated as an unavoidable part of life. Thanks to the tireless efforts of civil rights activists, this is no longer the case. An international conversation and change is taking place to free women and minorities from the bigotry and bad behavior which has held them back for so long. We need the same conversation about the eradication of Jew hatred now!

Jew hatred is structural and systemic, and has been a fixture of European and American society for 2,000 years. It’s time to end it.

We demand a world in which Jews can live free of discrimination, hatred and oppression. A world in which our civil rights and human rights are protected by laws, and our inclusion in society is backed by societal consequences for those who dare violate our rights.

We demand a world in which our historical victimhood and minority status is acknowledged, our value as a people is recognized and empowered by a society that accepts us – and those who preach or practice hate against us are punished with stiff legal and societal consequences. We have been falsely cast as white oppressors, despite suffering centuries of persecution and violence at the hands of white supremacists – which persists to this day.

We seek to decolonize Jewish identity and reclaim what it means to be a Jew for ourselves. For centuries, Jewish culture and identity have existed in Christian and Islamic worlds that hated and oppressed us. Unable to tell our own story, we were seen only through Christian or Muslim eyes. We have an opportunity to express an authentic Jewish culture devoid of external influences. Only by reclaiming our own narrative power can we achieve liberation from second class status. On campus that means refusing to allow Jew hating faculty or activists, often funded by foreign powers, to spread poisonous lies about our community that indoctrinate the next generation to hate. We demand the end of corrupt foreign influence that perverts our history, religion and culture, and demand that Jews receive the space to speak about and define our own lived experience.

We call on the West to rediscover its classical liberal values and enforce equality for all. Our vision is nothing less than total social, cultural and political liberation and redemption.

Zionism is the civil rights movement of the Jewish people, the oldest and most persecuted minority community in the world. Zionism is an expression of Jewish pride. It is racist to deny Jewish people the right to self sovereignty.

No Jew should ever feel isolated or singled out for being Jewish, and no drop of Jewish blood should be spilled in hatred ever again. Jew hatred is systemic in western culture and we must eradicate it. We need to stand up boldly and proudly for Justice for Jews.

It is not enough to say Never Again. The human psyche must be rewired so that Jew hatred is no longer an acceptable part of any society’s DNA. We are seeking a seismic change where the targeting of Jews as a minority community will be eliminated. Jew hatred must be as detestable as any other type of bigotry.

We will no longer tolerate antiquated stereotypes and casual exclusion. We will not be entangled in Middle Eastern politics and we repudiate the requirement for Jews to defend or reject the policies of Israel as a condition of acceptance. Nor do we accept the right of non-Jews to attack Jewish self-sovereignty and political redemption. Instead we work to decolonize Jewish life and Jewish bodies.

We will create a better, more just world by unifying and mobilizing the Jewish community to fight for Justice for Jews.  We will work to empower local Jewish communities by supporting on-the-ground activists and leaders. We do not exclude any part of the Jewish community due to differences in theology or political stances. Peaceful direct action is our way of forcing the powerful to abandon their prejudices and unjust systems, which have been exclusionary and harmful to Jews for too long.

Now is the moment to de-wire Jew hatred from our culture.

A world without Jew hatred is possible. Join us to make it a reality.

What is Jew Hatred?

For a deeper and broader understanding of Jew hatred, read “Why The Jews?” by Dennis Prager.  Here is an excerpt:

"The Jews have been objects of hatred in pagan, religious, and secular societies.  Fascists have accused them of being Communists, and Communists have branded them capitalists. Jews who live in non-Jewish societies have been accused of having dual loyalties, while Jews who live in the Jewish state have been condemned as 'racists.' Poor Jews are bullied, and rich Jews are resented. Jews have been branded as both rootless cosmopolitans and ethnic chauvinists. Jews who assimilate have been called a 'fifth column,' while those who stay together spark hatred for remaining separate."

Jew hatred is systemic and subconscious. All non-Jews have received anti-Jewish conditioning by virtue of the world they grew up in. It’s been accepted as a historical given. It’s been excused using foreign politics and anti-capitalist rhetoric. It takes the form of ethnic, religious and cultural discrimination. Jews have been denied their right to self-determination in our historic homeland.

The more successful we become the more discrimination we face.

Jew hatred is a living and real experience and the majority of Jews have experienced it.